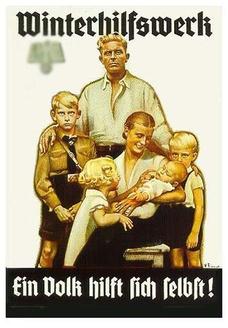 Adolf Hitler thought that people of Northern European descent were a superior race to all others known as the Aryan Race. Throughout World War 2 his goal was for that perfect race known as the "Übermensch" which translates as "Super Man". Their goal was to wipe out those of not pure Aryan descent or the "Untermensch” which translates as "Sub-Human". Because Hitler believed people such as Jews to be impure, he killed many of them in his quest for utopia. He also believed that the reason that the Germans lost World War I was that the German race had been weakened due to the inter-marriage of Übermensch and Untermensch.

The idea of the "Master Race" came from a 19th century theory which claimed that there was a hierarchy of races. The bottom of that hierarchy included dark-skinned people and Jews. In the middle were the Spanish, French, Portuguese, and Italians who were considered semi-tainted by mixing with the Untermensch. The top of the hierarchy were Germans, Swedes, Icelanders, Norwegians, Danes, English, and Dutch who were considered the Aryans. From a leaflet 'The Nazi Race' in 1929 "The Aryan race is tall, long legged, slim. The race is narrow-faced, with a narrow forehead, a narrow high-built nose and a lower jaw and prominent chin the skin is rosy bright and the blood shines through ..... the hair is smooth, straight or wavy - possibly curly in childhood. The colour is blond."

In order to get a pure race, Hitler created a selective human breeding program called the Lebensborn program. He made breeding facilities where Aryan women were recruited to have children with S.S. soldiers. Any German man who wanted to be part of the program had to prove that he was in perfect physical condition and is "racially pure" as far back as the year of 1750. Marriages between those of the Aryans and those who weren't was considered a major crime. The Lebensborn program produced more the 42,000 babies before it was closed down in 1944. The Germans also captured Aryans from conquered countries which surrounded them. From just Poland, they kidnapped 200,000 Aryan children. To be considered of the Aryan Race in Hitler's eyes you didn't just have to have blonde hair and blue eyes but you needed to be physically fit. The Lebensborn  program required male applicants to be at least 6 ft. tall near the end of it. Hitler thought people who were 6 ft.6 in. and taller as the highest creed of the  Übermensch and called them "Hünenmensch" and considered them to be the closest relatives to the original Germanic warrior tribes. Nazi soldiers with that tribute were given a special medal called the Hünenkreuz and instant promotion to the status of S.S. officer. People who had the trait of gigantism were not considered as one of these special Germans because they grow abnormally tall due to a defective pituitary gland.

For every imperfect person with a disease or religion that Hitler didn't like he killed them equaling an unimaginable amount of deaths just for the ideal human. Today people are still searching for the Aryans but we all know as a fact that these "perfect people" (or at least Hitler's Aryans) were just perfect in the body not the mind. So for now humans will continue to be imperfect and I doubt we will ever find the true Aryans which Hitler thought he had found. It is as Miley Cyrus once said ,"Nobody's perfect."